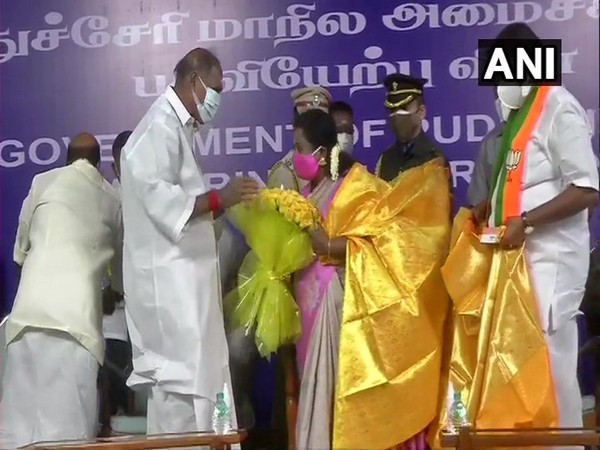 Puducherry [India], July 11 (ANI): The Puducherry government announced the distribution of portfolios of ministers on Sunday saying that CM N Rangasamy will hold 13 portfolios, including Health and Family Welfare, Hindu Religious Institutions and Wakf Board.
Home Minister A Namassivayam will hold six portfolios, including Industries and Commerce & Sports and Youth Affairs, according to the official announcement.
Public Works Minister Lakshminarayanan has been allotted six portfolios including Information and Technology, and Law.
C. Djeacoumar, Agriculture Minister will hold Women and Child Development, and Backward Class Welfare. He will be holding a total of 6 portfolios.
Transport Minister Chandira Priyanga will also be holding 6 portfolios, including Economics and Statistics, and Labour and Employment.
A.K. SAI J. Saravanan Kumar, the Civil Supplies and Consumer Affairs Minister will be holding Community Development and Fire Services among others.
On June 27, five MLAs of the ruling coalition government led by Chief Minister N Rangasamy had been sworn in as ministers by Lieutenant Governor Tamilisai Soundararajan. A Namassivayam of Bharatiya Janata Party (BJP) and Chandira Priyanga of All India NR Congress are among the prominent names who were inducted into the cabinet.
The AINRC-led NDA had won in the single-phase Puducherry assembly elections, which were held on April 6.
This is the first time that the BJP is part of the government in the union territory.
The BJP which was angling for a Deputy chief minister's post settled for the Speaker's post and BJP's R Selvam was elected unopposed as Speaker of the Puducherry Assembly on June 16. (ANI)