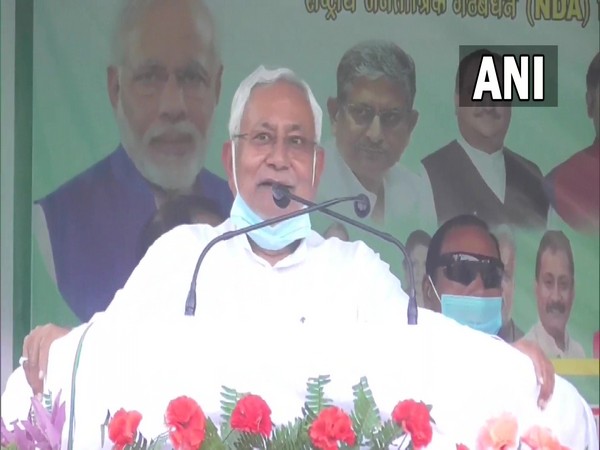 Munger (Bihar) [India], October 26 (ANI): Slogans of 'Lalten Chhaap Zindabad' were raised on Tuesday in the Tarapur area of Munger district where Bihar Chief Minister Nitish Kumar addressed an election rally.
Lalten (lantern) is Rashtriya Janata Dal's (RJD) election symbol. However, this did not affect the rally. Nitish Kumar campaigned for the Janata Dal-United's candidate Rajiv Kumar Singh.
While addressing the people, Nitish Kumar said, "We have worked for education by giving Student Credit cards. We are working on the development. If something goes wrong and they (opposition in the state) get the opportunity to win in the upcoming bypolls, then you will once again have to start staying at home before it gets dark. Therefore, understand everything properly. Never forget, the oppression under the earlier government."
"Our government provided clean water to the places where the water was fluoride- and arsenic-affected."
Earlier in the day, Yadav had said that he will ensure the "Visarjan" of Chief Minister Nitish Kumar and the ruling NDA in the state.
Reacting to Lalu Prasad Yadav's statement, Nitish Kumar had said that Yadav could get him shot but could not do anything else.
In 2020, the ruling coalition, NDA secured a majority with 125-seats in the 243-seat strong Bihar Legislative Assembly of which BJP won 74 seats, Janata Dal (United) on 43 while eight seats were won by two other NDA constituents.
The RJD, on the other hand, emerged as the single-largest party with 75 seats while Congress won only 19 of the 70 seats it had contested. (ANI)