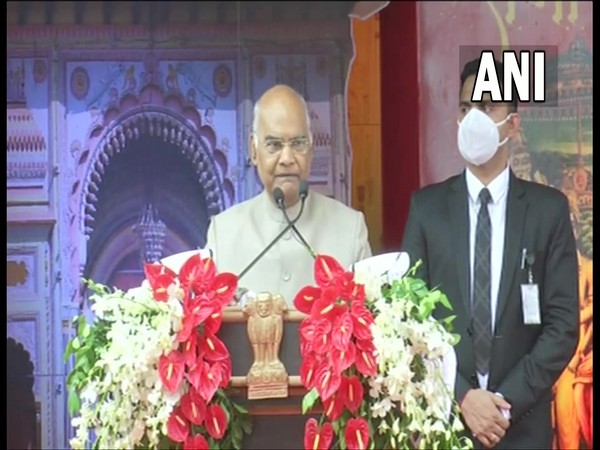 Ayodhya (Uttar Pradesh) [India], August 29 (ANI): President Ram Nath Kovind on Sunday addressed the Ramayana Conclave in Ayodhya and lauded the Uttar Pradesh government's efforts to take 'Ramayana' to common people through art and culture.
Speaking at the conclave, President Kovind said, "I commend Chief Minister Yogi Adityanath and his team for the campaign that has been launched by Uttar Pradesh government today to take Ramayana to common people through art and culture by organising Ramayana Conclave."
Earlier today, President Ram Nath Kovind arrived at Ayodhya onboard the special presidential train. He was received by Governor Anandiben Patel and UP CM Yogi Adityanath on arrival.
While mentioning a very popular 'chaupai' of Ramcharitmanas, the President today in the conclave said, "The meaning of this line is that knowing the whole world as God, we should accept everyone with respect. Let us all see Goddess Sita and Lord Rama in every person. Lord Ram is for everyone, and Lord Ram is in everyone. Let us all fulfill our obligations with this warm thought."
"To prove the significance of this Ramayana Conclave, it is necessary that the basic ideals of Ram-Katha should be propagated everywhere and everyone should adopt those ideals in their conduct. I wish that just like all the people in Ram Rajya were free from physical, divine and material sufferings, similarly all our countrymen would lead a happy life ahead," he said.
Recalling Mahatma Gandhi's tribute to the country, the President said, "Gandhiji has given the name of Ram Rajya that was his vision of ideal India. The name of Ram was very important in the life of Bapu. Mahatma Gandhi imbibed the ideals of Lord Ram in public life. In fact, the 'Maryada-Purushottam' form of Lord Rama described in the Ramayana is ideal for every person."
"The creation of such an inclusive society by Lord Ram is an excellent example of social harmony and unity, which is exemplary for all of us even today. Ramayana is such a unique book which presents the high ideals and limits of human life in front of the world community through Ramkatha. I am sure that this effort of the Uttar Pradesh government for the promotion of Ramayana will prove to be important in the interest of Indian culture and the entire humanity," the President said.
President Ram Nath Kovind is on a four-day UP visit from August 26. Yesterday, President Ram Nath Kovind on Saturday inaugurated the Mahayogi Gorakhnath Vishwavidyalaya in Uttar Pradesh's Gorakhpur. (ANI)