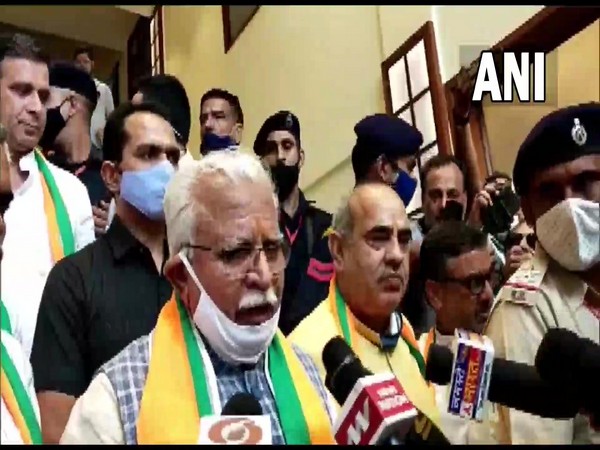 Karnal (Haryana) [India], August 28 (ANI): Commenting on lathi-charge by Haryana Police on the protesting farmers in Karnal, Chief Minister Manohar Lal Khattar on Saturday said that obstructing official work is against democracy.
"If they wanted to protest, they should've done it peacefully. If they jam highways and throw stones at police, then police will also take steps to maintain law and order," Khattar added.
Further, he said that necessary action would be initiated against the defaulters. "We'll look into it and take necessary action," Khattar said.
Adding to it, Haryana Additional Director General of Police (ADGP) (Law and Order), Navdeep Singh Virk said, "At 12 noon, some protesting farmers blocked the national highway and tried to march towards Karnal city. When stopped, some protesters threw stones at policemen. Police used force to disperse them. 4 farmers and 10 policemen were injured."
Police resorted to lathi-charge in order to disperse protesting farmers from Bastara toll plaza Saturday morning.
To protest against the baton-charge of farmers in Haryana's Karnal, BKU leader Rakesh Tikait called for blocking of all the roads till 5 pm in the state.
"Today, in protest against the lathi charge in Karnal, Haryana, all the roads will be blocked till 5:00 pm. The government's target is the Kisan Mahapanchayat organized in Muzaffarnagar on September 5, it wants that the people of Haryana should not be able to attend the Mahapanchayat, all of you should pay attention to these this," Tikait tweeted.
Following his call, the Surajpur Toll Plaza (Kalka-Zirakpur Highway) had been blocked by protesting farmers, Commissionerate of Panchkula informed in a tweet.
Haryana Chief Minister Manohar Lal Khattar was scheduled to attend an event in Karnal today. Farmers gathered in large numbers in the area to protest against his visit and against the three farm laws. To stop the farmers moving towards the programme venue, police lathi-charged them, leading to several farmers sustaining injuries. (ANI)