'No jobs in Bihar': Tejashwi Yadav slams CM Nitish Kumar after two from state killed by terrorists in J-K 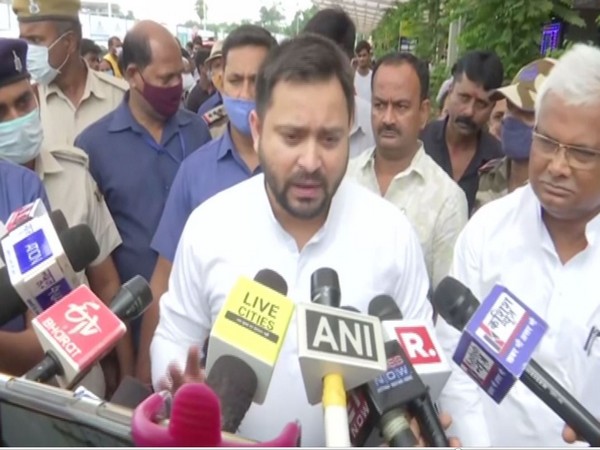 Patna (Bihar) [India], October 18 (ANI): Tejashwi Yadav, the leader of opposition in Bihar assembly, on Monday, slammed the state government for the killing of two Bihari labourers in Jammu and Kashmir terror attack, saying Chief Minister Nitish Kumar failed to provide jobs in the state, resulting in people migrating to other places for employment.
"No employment and job opportunities in Bihar, and if you move out of the state, get killed," Yadav tweeted, adding that the state government of Janata Dal (United) and Bharatiya Janata Party combine has done a mere formality by announcing compensation for the kin of those killed.
"Chief Minister Shri Nitish Kumar ji, after adjudging the worth of a Bihari's life at Rs 2 lakh, will be unconcerned without expressing any condolences," the Rashtriya Janata Dal leader added.
On Sunday, two labourers, Raja Reshi Dev, Joginder Reshi Dev, were killed by terrorists in Jammu and Kashmir's Kulgam district, while another migrant labourer, Chunchun Reshi Dev, was grievously injured.
Kumar, in a telephonic conversation with Jammu and Kashmir Lieutenant Governor Manoj Sinha expressed serious concerns over the killings.
The chief minister also announced Rs 2 lakh each for the families of Raja Reshi Dev and Joginder Reshi Dev.
A street hawker from Bihar and a labourer from Uttar Pradesh were killed in two back-to-back attacks by terrorists in the Srinagar and Pulwama districts of Jammu and Kashmir on Saturday.
Over the past few days, several civilians have been killed by terrorists in Jammu and Kashmir, sparking fear in the Valley.
Security forces in the union territory, over the past few days, neutralised 13 terrorists in encounters. (ANI)