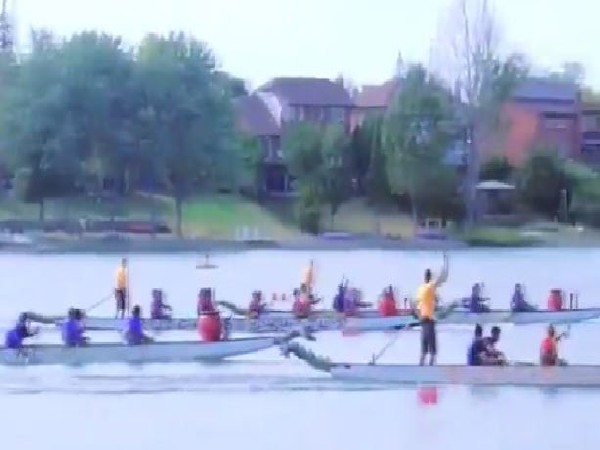 New Delhi [India], August 29 (ANI): The famed Kerala Boat Race was on Sunday recreated at a lake in Canada by members of the Malayalee community living there and formed part of celebrations of Azadi Ka Amrit Mahotsav' to commemorate 75 years of India's Independence.
On Sunday the Professor's Lake at Brampton in Canada witnessed 21 teams including two teams of women participating in the traditional boat race.
Union Minister of State for External Affairs, V Muraleedharan took to Twitter to post "Kerala Boat Race goes global".

"Kerala Boat Race goes global! Traditional Kerala Boat Race recreated in Professor's Lake, Brampton, Canada by IndianToronto and Brampton Malayalee Samajam as part of Azadi ka Amrit Mahotsav Watch the enthusiastic participation of 19 mens' and 2 women's teams vying for the trophy", he tweeted.
Each boat had 11 members and the event was organised by India in Toronto, the Consulate General of India, and Brampton Malayalee Samajam.
Brampton Boat Race is one of the only such events that hosts the traditional Vallamkali (boat race) in the whole of North America, according to the Brampton Malayalee Samajam, which calls itself as a non-profit, non-political, secular and cultural organization whose principal objective is that of preserving and maintaining the culture, language and heritage of Kerala.
Boat races have been a part of Kerala's tradition. (ANI)