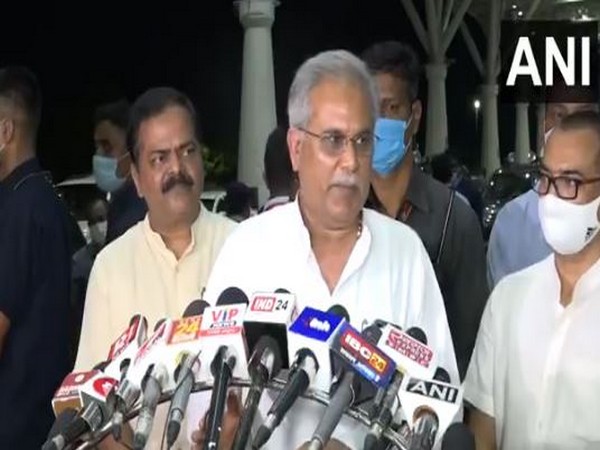 Jashpur (Chhatisgarh) [India], October 17 (ANI): Chhattisgarh Chief Minister Bhupesh Baghel after the Congress Working Committee (CWC) meeting on Saturday, said that the governments of Madhya Pradesh and Odisha should take action to check the smuggling of ganja in their states.
The Chief Minister's statement came over the Jashpur incident that took place on Friday evening when an idol immersion procession was being carried out at Pathalgaon. A car ran over the procession that killed one person and injured 17. Two people who have been arrested were accused of smuggling 'ganja'.
While interacting with the media Baghel said, the vehicle and ganja smuggler belonged to Madhya Pradesh and the car was coming from Odisha. Whether it is Mahasamund or Bastar ganja has been seen coming from Odisha often. Therefore "Odisha and the Madhya Pradesh government should take strict action in this matter," he said.
On the Bharatiya Janata Party (BJP)'s agitation on the Pathalgaon incident, the CM said, they should hold a dharna against the Madhya Pradesh government because ganja smuggler belongs to the state.
Earlier on Saturday Raigarh BJP MP Gomati Sai and the local people sat on a dharna (sit-in demonstration) demanding Special Investigation Teams (SIT) probe and judicial inquiry of the Jashpur incident.
As far as the Chhattisgarh government is concerned, the incident is very unfortunate but all the action has been taken accordingly since the incident took place, Baghel said.
"The accused have been arrested, the current sub-inspector (SI) has been suspended and the investigation is going on, he said.
The CM also talked about the CWC meeting and said the meeting was held under the chairmanship of party president Sonia Gandhi. The program was for the discussion of an upcoming by-election in MP.
The bypolls in Madhya Pradesh will take place on three assembly segments-- Prithvipur, Jobat and Raigaon and one Lok Sabha seat-- Khandwa.
As per the notice issued by the Election Commission of India (ECI) about a week ago, the by-elections will take place on October 30 and the counting of votes and announcement of results will be on November 2. (ANI)