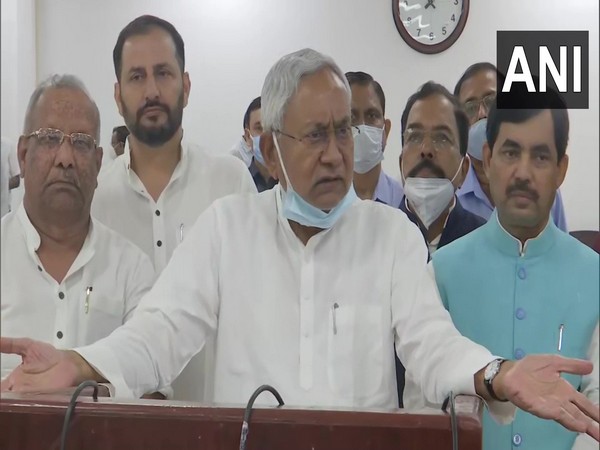 Patna (Bihar) [India], October 18 (ANI): A day after two non-locals labourers were killed after terrorists fired indiscriminately upon them at the Wanpoh area of Kulgam in Kashmir, Bihar Chief Minister Nitish Kumar said that he has spoken to Jammu and Kashmir Lieutenant Governor (L-G) Manoj Sinha and raised concerns over the killings.
He said, "I have spoken to Jammu and Kashmir L-G and raised concern over recent killings. Clearly, some people are targeting those who have gone to Jammu and Kashmir to work. We are hopeful that measures will be taken for the security of migrants in the union territory."
In the past few days, Jammu and Kashmir witnessed a spate of targeted killings of civilians especially non-locals.
As per CID sources, the three non-Kashmiri labourers fired upon by terrorists in Wanpoh, Kulgam (in Jammu and Kashmir) were identified as Raja Reshi Dev (dead), Joginder Reshi Dev (dead) and Chunchun Reshi Dev (injured). All of them hail from Bihar.
Over the past few days, several civilians have been killed by terrorists in Jammu and Kashmir, sparking fear in the valley.
Meanwhile, the security forces in the union territory have undertaken many counter-terrorist operations over the past few days and as many as 13 terrorists have been killed in nine encounters between security forces and the terrorists after the civilian killings. (ANI)