Congress should be 'strong alternative' to BJP in national politics: Lalu Yadav 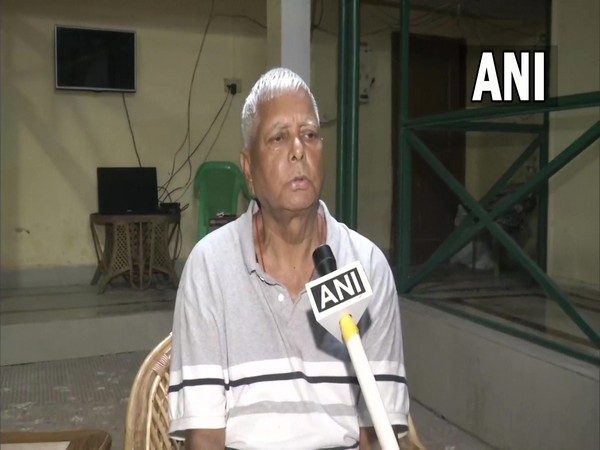 Patna (Bihar) [India], October 26 (ANI): Ahead of the by-polls in Bihar, Rashtriya Janata Dal (RJD) chief Lalu Prasad Yadav on Tuesday called upon the Congress to become a 'strong alternative' to the BJP at the national level politics and said that his party has always supported the Congress in every situation.
Speaking to ANI, Yadav said, "I agree that my alliance is with the Congress on a national level. But at the state level, the situation is different. At the national level, we want a strong alternative to the BJP and therefore I have always supported Congress in every situation."
"Prime role should be that of Congress. Has anyone helped Congress more than us? It is an old party, an all-India party, we still consider them so," the RJD supremo said.
"Alliance is formed with like-minded people, secular forces. At the state level also, we formed an alliance with Congress, the Left and other parties...Let people say whatever they want to," he said.
Earlier, the veteran leader had said that RJD's candidates would lose their deposit in the elections if they remain in alliance with the Congress in the state ahead of the by-polls in two assembly constituencies.
RJD supremo further slammed the Centre over the inflation and said, "Fuel prices are soaring, and diesel is costing more than ghee. How will people cook without kadwa tel (mustard oil)?"
Lalu Prasad Yadav returned to Bihar after over three years.
The Jharkhand high court, earlier in April, granted bail to RJD leader Lalu Prasad.
The former Bihar chief minister, who was undergoing treatment at Ranchi's Rajendra Institute of Medical Sciences for two years, was shifted to All India Institute of Medical Sciences in New Delhi in January. (ANI)