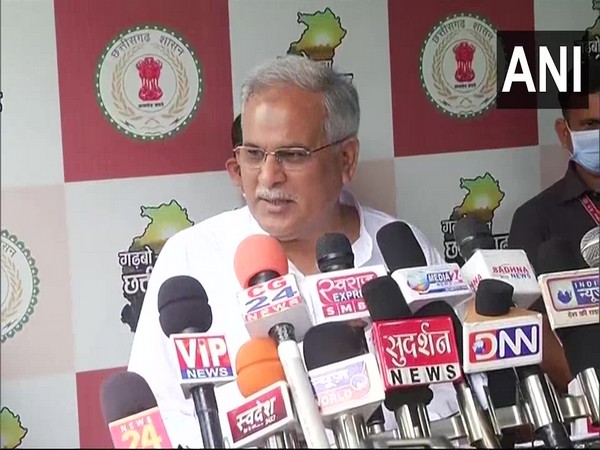 Raipur (Chhattisgarh) [India], September 17 (ANI): Slamming the Bharatiya Janata Party (BJP), Chhattisgarh Chief Minister Bhupesh Baghel on Friday said the party follows Mahatma Gandhi's assassin Nathuram Godse and it should not question the sanctitude of the Nehru-Gandhi family.
Asked about BJP's attacks over Rahul Gandhi and his family, the Chief Minister said, "We are followers of Gandhi, they (BJP) are followers of Godse. BJP and RSS do not have any right to question the sanctitude of the Nehru-Gandhi family. BJP should talk about Godse and Savarkar. The whole world knows about the Gandhi-Nehru family and the sacrifices they made for the country.
"We do not need a certificate about them from those who believe in Godse and Savarkar. The people who used to lick the feet of the British will ask us questions?" he asked.
Briefing media persons here, Baghel said that attempts are being made to defame Chhattisgarh for political motives.
"Attempts are being made to defame Chhattisgarh for political motive. Compare the previous figures and also see the status of other states. There has been a steady decline in crime figures under our rule," he said. This came after the National Crime Records Bureau's (NCRB) report revealed on Wednesday.
Commenting on the illegal smuggling of ganja, the Chief Minister said, "The central agency should carry on investigation and take action where ganja is being produced. The residences of artists are being raided in Mumbai for 10 grams of ganja. Where there is open smuggling there should be an investigation." (ANI)