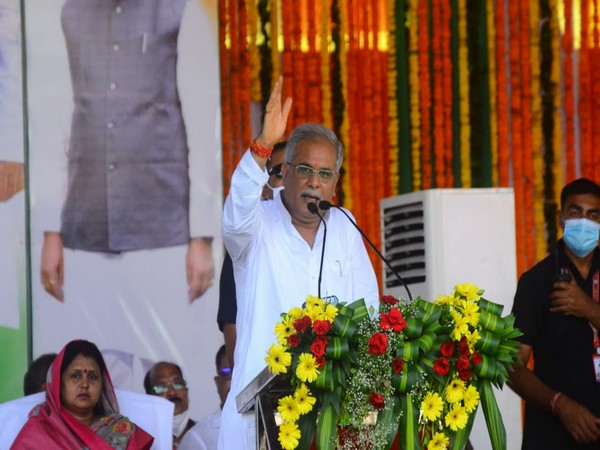 Bemetara (Chhattisgarh) [India], October 2 (ANI): Chhattisgarh Chief Minister Bhupesh Baghel on Saturday launched an innovative project of electricity production by using cow dung.
The project was launched at 'Kisan Sammelan' organised at Basic School Ground of Bemetara district headquarters on the occasion of Gandhi Jayanti.
With this project, villages and gauthans of the state will soon get illuminated by the electricity produced from cow dung. The machines installed in Rural Industrial Parks of gauthans would be run on electricity produced from cow dung, stated an official release.
All the necessary preparations for electricity production from cow dung have been completed in most of the gauthans in the state, it added.
Baghel launched the project at Sikola Gauthan of Durg district, Bancharoda Gauthan in Raipur district, and Adarsh Gauthan Rakhi in Bemetara district.
On the occasion, the Chief Minister said, "The government of Chhattisgarh is trying to make the villages self-supporting, realising the vision of 'Gram Swaraj' of the Father of the Nation, Mahatma Gandhi. Now the villages of Chhattisgarh will be self-supporting in the matter of power generation from cow dung."
Gauthans will now produce electricity from cow dung, besides manufacturing organic manure, doubling the benefits and incomes of Gauthan Samitis and women self-help groups.
Notably, under the Suraji Gaon Yojana, Gauthans have been developed in the form of Rural Industrial Parks in about 6,000 villages of the state of Chhattisgarh.
As per the official statement, manure production and other income-oriented activities are being conducted by the women of the group.
In the first phase, units for power generation from cow dung have been set up at Rakhi in Bemetara district, Sikola in Durg and Bancharoda in Raipur district. One unit will produce 85 cubic meters of gas. Since one cubic meter produces 1.8 KW of electricity, 153 kW of electricity will be produced in one unit.
In this way, about 460 kW of electricity will be generated from the biogas genset units installed in the above three Gauthans, which will power the lighting system in the Gauthans as well as the machines installed.
After the generation of electricity from this unit, the remaining slurry water will be used for irrigation in the bari and pasture, and organic manure will be prepared from the remaining residue.
Under Suraji Gaon Yojana, Chhattisgarh Government has approved the construction of 10,112 gauthans in the state for conservation and nourishment of livestock in villages. Construction of 6,112 gauthans has been completed and made operational. So far, more than 51 lakh quintals of cow dung have been procured in gauthans at Rs 2/kg, in return, Rs 102 crores have been paid to the villagers and cattle rearers. So far, more than 12 lakh quintals of vermicompost, super compost manure has been produced from the cow dung procured. (ANI)