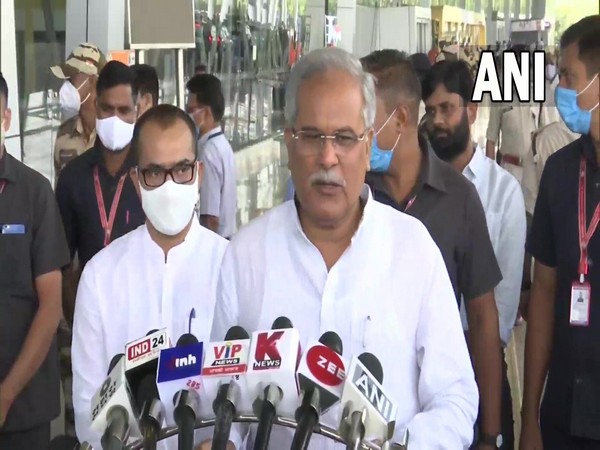 Raipur (Chhattisgarh) [India], October 25 (ANI): A day after a Congress leader got into a brawl with Chhattisgarh Health Minister TS Singh Deo's supporters who were demanding the implementation of '2.5 years rotational policy' for CM post at a conference in Jashpur, Chief Minister Bhupesh Baghel condemned the incident and said that repeatedly raising the 'change of guard' issue vitiates political atmosphere.
While on his way to Lucknow for a two-day visit, CM Baghel told reporters here today, "Such an incident should not have happened. Party's state incharge PL Punia has clarified everything. One should not spoil the atmosphere by raising questions again and again after that."
Referring to the tussle between Congress leader Pawan Agarwal and the Congress leaders, the CM said, "The incident could have been avoided. It was unfortunate, it should not have taken place."
Baghel's remarks came a day after several party leaders and workers on Sunday pushed former district unit president Pawan Agarwal on the stage and prevented him from completing his speech at a party workers conference in Jashpur, amid the ongoing political turmoil in the Chhattisgarh unit of the Congress.
In a video from the party conference, Congress leaders and workers can be seen engaging in an altercation after Agarwal, reportedly started speaking about Health Minister TS Singh Deo.
The video footage showed Agarwal being pushed away from the stage and stopped from completing his speech after a large number of party workers jumped on the stage.
"TS Singh Deo waited for 2.5 yrs (to become CM) and now Bhupesh Baghel must vacate his seat. When there was no Congress government here, Deo and Baghel worked together. It is due to them that the Congress government came to power. When I was saying this, people of Kunkuri MLA attacked me," Agarwal said after the brawl.
As per party sources, the pro-Baghel camp has been expressing displeasure over a possible change of guard in the state as Congress leader TS Singh Deo has allegedly been pitching for a rotational tenure of the chief minister.
After the Bhupesh Baghel-led government completed two-and-a-half years in office in June, the supporters of TS Singh Deo raised the issue of rotational chief ministership.
Congress won the Chhattisgarh assembly polls held in December 2018 with a thumping majority. Then, the state Congress president Baghel was made the chief minister. Deo was the head of the manifesto committee in the election. (ANI)