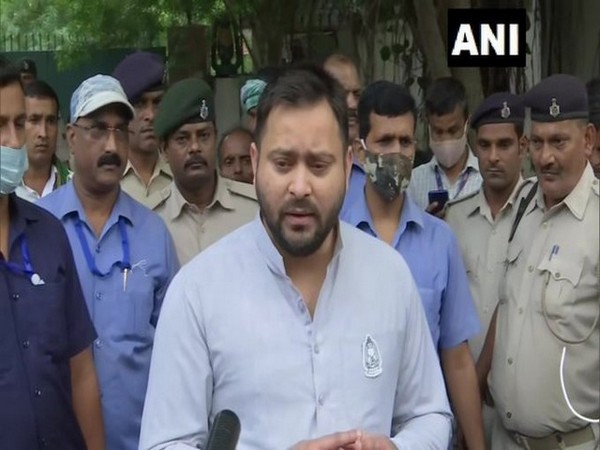 Patna (Bihar) [India], October 25 (ANI): Ahead of By-polls in Bihar, Leader of opposition in the state assembly Tejashwi Yadav on Monday slammed Chief Minister and JD-U President Nitish Kumar over "poor health facilities" in Bihar and alleged that the need to conduct by-polls has arisen because Kumar could not provide proper medical treatment to the MLAs of his own party.
Speaking to reporters here today, the RJD leader said, "In the NITI Aayog report, Bihar is the worst-performing state in Health. These by-elections are happening because CM Nitish Kumar's government didn't provide treatment even to their MLAs. So on what basis will Nitish Kumar ask for votes from the public."
The RJD leader further alleged that both the MLAs died because of the bad medical facilities in the state.
He said, "By-elections are being held in both the places because of bad arrangements of the government during the COVID period. Because of that, all those people were admitted to the private hospital. Mevalal Choudhary died while undergoing treatment at a private hospital in Patna and Shashi Bhushan Hazari went to Delhi for treatment."
The Election Commission of India, earlier on September 28, announced by-polls for three parliamentary and 30 assembly seats across 15 states and Union territories (UTs) in the country. Voting for the By-elections in Kusheshwar Asthan (SC) and Tarapur assembly constituencies in Bihar will take place on October 30, while the counting of votes and announcement of results will be on November 2.
The Tarapur and Kusheshwar Asthan seats had fallen vacant following the death of sitting MLAs Mewalal Choudhary and Shashibhushan Hazari, respectively.
Claiming that people have lost faith in the current Nitish Kumar-led NDA government in Bihar, Tejashwi further expressed confidence that RJD candidates will win from both seats.
"In the last election, the NDA government promised to give 19 lakh jobs to people. How many people got jobs? So on what basis will Nitish Kumar ask for votes from the public? We have visited each and every village and panchayat of the district and people are worried, they have lost faith in the state government. We have full faith that people are with us and RJD candidates will win from both Kusheshwar Asthan and Tarapur," he added.
The RJD leader further alleged that Nitish Kumar is running the state for the past 15 years, yet there is no development in Bihar, adding that people in the state are complaining about the inflation and bad conditions of roads.
"He is running the state for the last 15 years but there is no development in the state. People showed faith in Nitish Kumar but today people are worried now. They are complaining about the inflation and bad condition of roads," said the RJD leader.
He also challenged Nitish Kumar to take a road trip in all the three blocks of Kusheshwarsthan.
"I challenge Nitish Kumar to take road trip in all the three blocks of Kusheshwarsthan. We do not say that one should not campaign by helicopter. Due to lack of time, people campaign through helicopter, but being a chief minister he should visit villages to see the developments," he added.
Voting for the by-polls will take place from 6 am to 7.30 pm on October 30.
Meanwhile, the Election Commission had banned the dissemination of opinion and exit polls results before the 48-hours period till the polling ends. (ANI)