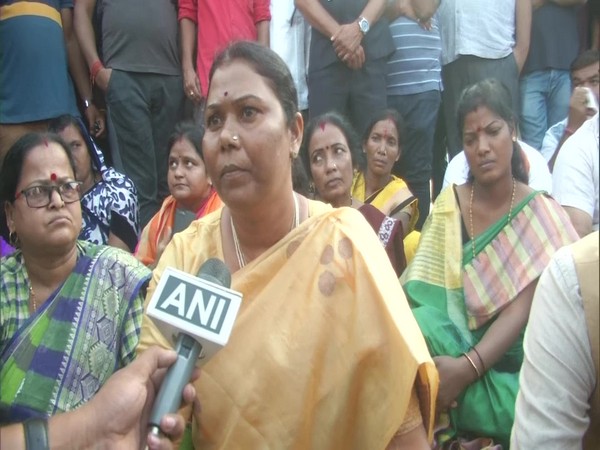 Jashpur (Chattisgarh) [India], October 16 (ANI): Raigarh BJP MP Gomati Sai and the local people on Saturday sat on a dharna (sit-in demonstration) demanding SIT probe and judicial inquiry of the Jashpur incident in which a car ran over an idol immersion procession killing one and injuring 17 people on Friday evening.
She further alleged the involvement of the police and the administration in the incident.
"This incident has happened with well thought out strategy. Police & administration are involved in this. Smuggling is happening because of govt. If CM can go to Lakhimpur Kheri then why he can't come here? We demand SIT, judicial inquiry of this incident and culprits should be punished," said Sai.
The incident took place on Friday evening when an idol immersion procession was being carried out at Pathalgaon in the Jashpur district. The car ran over the procession that killed one person and injured 17. However, two people, who have been arrested, are also accused of smuggling 'ganja'.
Meanwhile, the state BJP had called for a 'bandh' in Jashpur today due to which the shops and markets remained closed. (ANI)