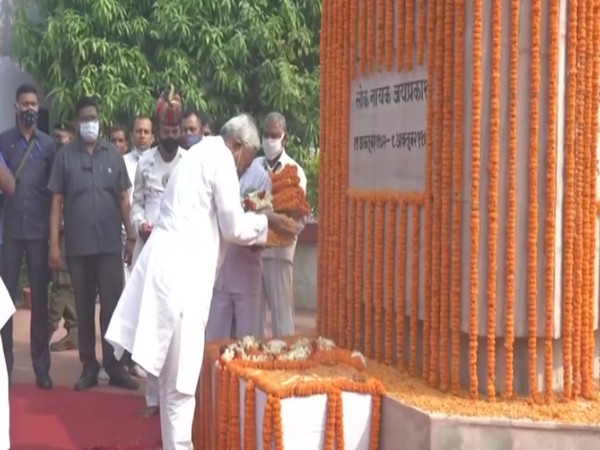 Patna (Bihar) [India], October 11 (ANI): Bihar Governor Phagu Chauhan and Chief Minister Nitish Kumar paid floral tributes to 'Loknayak' Jayaprakash Narayan on his 119th birth anniversary in Patna on Monday.
Earlier, Prime Minister Narendra Modi paid tribute to 'Loknayak' Jayaprakash Narayan and said that he had a remarkable personality that "left an inedible mark on India's history."
"Tributes to Loknayak JP on his Jayanti. He was a remarkable personality, who left an inedible mark on India's history. He devoted himself to public welfare initiatives and was at the forefront of protecting India's democratic ethos. We are deeply inspired by his ideals," the Prime Minister tweeted.
The 'Loknayak' was one of the prominent faces of the Quit India Movement and he is remembered for leading the mid-1970s opposition against Prime Minister Indira Gandhi, for whose overthrow he had called for a "total revolution".
The Janata Party was voted into power and became the first non-Congress party to form a government at the Centre under his guidance.
He was posthumously awarded India's highest civilian award, the Bharat Ratna, in 1999. (ANI)