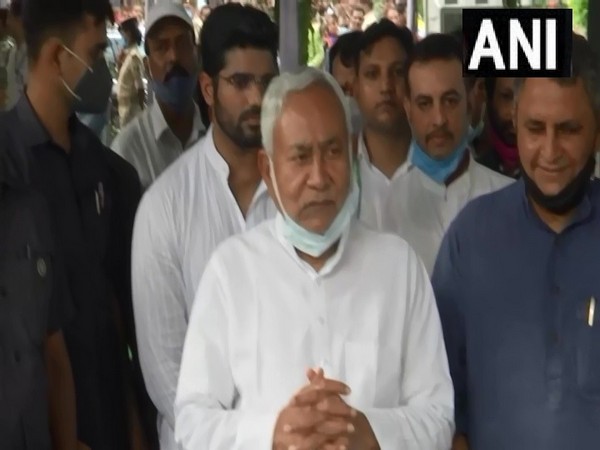 Patna (Bihar) [India], October 8 (ANI): On the first death anniversary of Union Minister and founder of Lok Janshakti Party (LJP) Ram Vilas Paswan, Bihar Chief Minister Nitish Kumar on Friday paid tributes in Patna and recalled the contributions of the late leader.
"Ram Vilas Paswan passed away on this day last year and today we are present here to pay tribute to him. The work he did, I am sure you will keep it up," the chief minister told reporters.
Union Food Processing Industries Minister Pashupati Kumar Paras also visited the LJP office in Patna today on the first death anniversary of Ram Vilas Paswan.
Speaking to media persons, Paras said: "My elder brother Paras was God to me and my family. He left us last year, may his soul rest in peace. Today I have come here to pay tribute on his first death anniversary."
Describing Paswan's life, he said that Paswan always used to raise his voice against inequality on the basis of caste. "When he was young, he got an opportunity to be appointed as Deputy Superintendent of Police (DSP), but he chose politics and work for people who discrimination on the basis of caste," Paras added.
Ram Vilas Paswan passed away on October 8, 2020 from a heart ailment.
Ram Vilas Paswan was Union Minister of Consumer Affairs, Food and Public Distribution in the Narendra Modi government. He was also a minister in the previous NDA government.
Paswan was first elected to the Lok Sabha in 1977 on a Janata Party ticket from Hajipur in Bihar. (ANI)