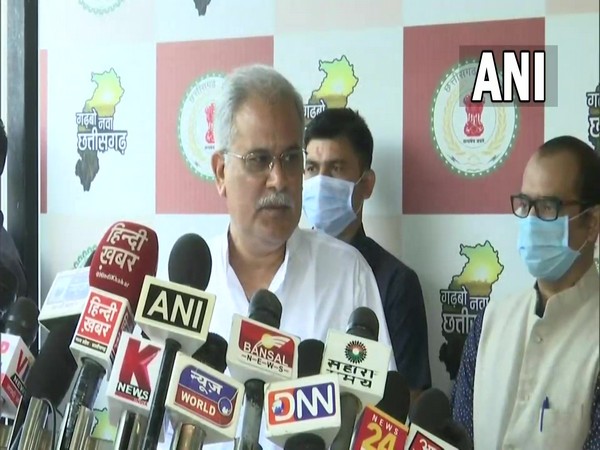 Raipur (Chhattisgarh) [India], September 26 (ANI): Issuing clarification for skipping the meeting on left-wing extremism called by the Centre on Sunday, Chhattisgarh Chief Minister Bhupesh Baghel said his absence should not be seen from a political prism since the Chief Secretary and Director-General of Police (DGP) of the state had attended the meeting on behalf of the state government.
"My absence from the meeting should not be viewed from a political prism because the Chief Secretary and DGP had attended the meeting. But I had given my time for an event long before this meeting was called. Hence the DGP and Chief Secretary were sent for the meeting," Baghel said while addressing media here.
Chhattisgarh is one of the worst affected states in the country.
Baghel said that he and Shah have often get into touch with each other regarding Naxalism in the state.
"A lot of Naxal-affected areas like Jagargunda and Silger in Chhattisgarh have been freed from Naxalism. The government is winning the trust of the people. People are getting their Aadhar, ration and health cards made. Work on employment, development, education is going on in such areas. Work is also going on to provide benefits of government schemes to people," Baghel added.
Earlier today, Union Home Minister Amit Shah chaired a high-level meeting with Chief Ministers of ten Naxal-hit states in Delhi to review the current status as well as to discuss future road map for security and development issues.
According to a statement issued by the Ministry of Home Affairs, the meeting chaired by Shah was attended by Union Minister of Rural Development and Panchayati Raj Giriraj Singh, Minister of Tribal Affairs Arjun Munda, Minister of Communications, IT and Railways Ashwini Vaishnav, Minister of State for Road Transport and Highways, Gen VK Singh, Minister of State for Home Affairs Nityanand Rai.
Chief Ministers of Bihar, Odisha, Maharashtra, Telangana, Madhya Pradesh and Jharkhand and Home Minister of Andhra Pradesh, senior officials from Chhattisgarh, West Bengal and Kerala, Union Home Secretary, top officials of Central Armed Police Forces and many senior officers of Central and State Governments were also a part of the meeting, informed the ministry. (ANI)