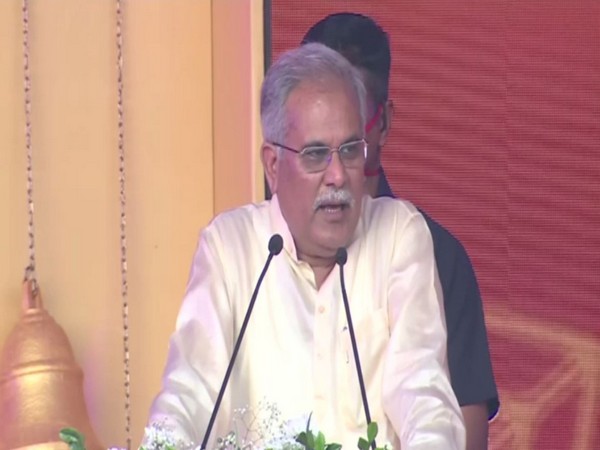 Raipur (Chhattisgarh) [India], October 8 (ANI): Chhattisgarh Chief Minister Bhupesh Baghel inaugurated works of renovation, beautification and infrastructure development at the Mata Kaushalya Temple on Thursday.
A beautiful light and sound show was organized as a part of the event. A 51 feet high statue of Lord Ram was also unveiled by the Chief Minister, which is built at the entrance of the temple premises.
While addressing the crowd at the event, he said, "Lord Ram stayed in Chhattisgarh for a decade out of his 14 years of exile. Chhattisgarh and its people played a key role in shaping Lord Rama as he is known today. We are so fortunate that we start our work by taking His name, be it during our happiness or sadness. Lord Ram is a part of our culture and lifestyle."
He also talked about developing pilgrimage spots in the state for cultural and tourism-related purposes.
Baghel also prayed for the happiness and prosperity of the people of the state and performed the customary rituals to worship Mata Kaushalya and the Lord Shri Ram at the ancient temple situated in the middle of the Jalsen pond in Chandkhuri.
Tourism Minister Tamradhwaj Sahu, Forest Minister Mohammad Akbar, School Education Minister Dr. Premsai Singh Tekam, Urban Administration and Development Minister Dr. Shivkumar Dahria, Women and Child Development Minister Anila Bhediya, Culture Minister Amarjeet Bhagat, Industries Minister Kawasi Lakhma, Rajya Sabha MP Chhaya Verma and Chairman of Gau Seva Aayog Mahant Ram Sundar Das, several parliamentary secretaries, MLAs and local public representatives were also present in the inauguration program held at the temple premises. (ANI)