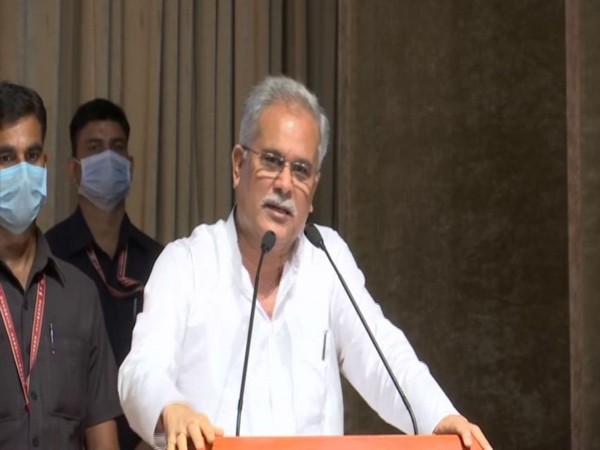 Raipur (Chhattisgarh) [India], September 25 (ANI): Chhattisgarh Chief Minister Bhupesh Baghel appreciated the efforts of the Pharmaceutical industry and its workers on Saturday during an event in Raipur on the occasion of the World Pharmacist Day.
'I salute the people associated with the pharmacies for their contribution during the COVID-19 crisis. They did an amazing job. The industry played a key role in making and distributing medicines among people. A lot of experiments were done. A lot of protocols were changed in India and the entire world related to medicines," Baghel said.
Baghel went on to thank everyone for the cooperation shown during the Covid crisis.
"Be it the people in Pharmacies, doctors, municipality workers police officers, everyone set an example by putting their lives on the line and working for humanity. Chhattisgarh showed a lot of spirit and unity during their fight with Covid. Every section of society cooperated with the government, took patients to the hospital, provided the needy with food and money. That is how we have managed to control Covid," said Baghel.
The Chief Minister recalled the struggles during the second wave of the pandemic when the case count had overwhelmed the healthcare system of the state.
"Chhattisgarh had reached the second place, below Maharashtra when it came to reporting cases. Before Covid, there was not a lot of awareness about oxygen beds, oxygen-related equipment and procedures to give Oxygen. In the first wave, only the medicines were being used and they were helping the patients. Industrialists gave us over 19,000 oxygen cylinders. We faced shortages of key medicines like Remdesivir initially. But later, we faced no shortages of such important equipment and medicines," he said.
During the event, Baghel said that the people associated with pharmacies have a very important role in ensuring that people are made aware of generic medicines and they become popular.
"Families do not really prepare a healthcare budget. But, healthcare is really the most expensive thing today. Medicines are getting out of reach of the common man. In this situation, it is the generic medicines which help the economies of many families. They are just as good as the expensive medicines," added Baghel.
Baghel noted that Chhattisgarh has a lot of forest area which comes with an abundance of good medicines.
"Anyone who wants to set up a business of forest medicine products, our government will provide them full support," he said. (ANI)